Apple probably wouldn’t have crammed iOS 6 onto the 3GS if they were about to stop selling it. Marco Arment

I've been seeing a lot of fixation on the sale of the 3GS in the tech press lately and I think they're missing an important point: it's decent to ship updates for hardware that's under warranty.

The first update that didn't support the original iPhone was released 1 year, 11 months, and 10 days after the original iPhone was discontinued1. The 3G got its last update 1 year, 4 months, and 8 days after its demise2. If the 3GS were obsoleted by iOS6, someone buying a new one tomorrow would be getting the same kind of software support as if they'd waited until the last minute to buy a MyTouch 3G. People expect more from Apple than that.

The important thing about the chart Michael DeGusta posted last year isn't that every iPhone was on the latest software 3 years after release, it was that every iPhone ever sold has had access to the latest version of iOS for at least a year after purchase. Given the reported effort it took to get iOS6 running smoothly on the 3GS, it's not worth selling after the launch of the New iPhone—that would require getting iOS7 to run on it as well.

Today we pulled into Juneau. I'm starting to get the impression that even the biggest cities in Alaska feel cozy, because we didn't get the feeling that this was a capital city; more like a fishing town. 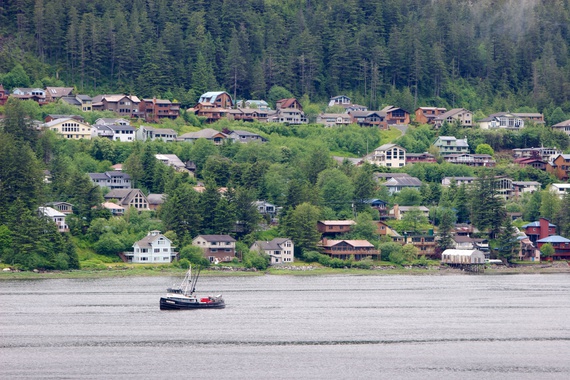 In the previous post I hinted that there was a good reason for Radiance to keep a local pilot on board. The first full day at sea brought us to Hubbard Glacier, which is a tidal glacier, meaning that the glacier is moving into the sea as opposed to across land. This means it spends most of its time generating icebergs. 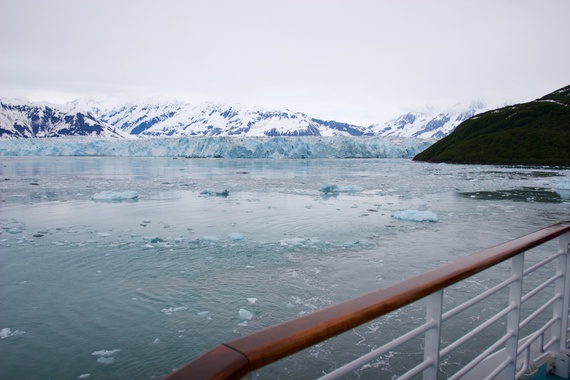 This was Milami's first time on a cruise, and the scale of these ships have to be seen to be believed. The Radiance of the Seas is built to the Panamax specification, which is literally the biggest you can build a boat that will still fit through the Panama Canal. 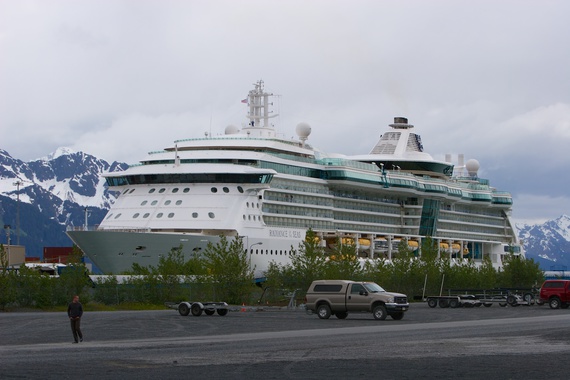 Anchorage is about 125 miles from Seward, so we had a leisurely drive down to the port, with some stops along the way. One such stop was the Alaska Wildlife Conservation Center, which is a drivearound safari kind of place. 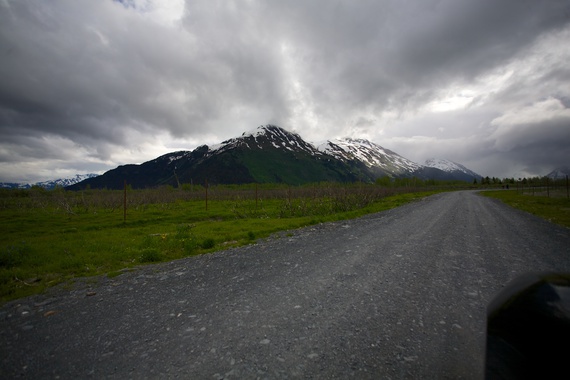 One of the main tasks of the center today is the reconstitution of wood bison herds in Alaska. Wood bison have been extinct in Alaska for some time, and the center has been breeding a new herd based off stock from the Yukon territory, set to be released into the wild in 2013. 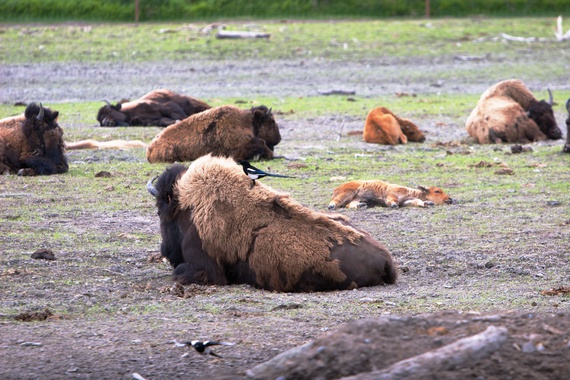 Like any good conservation center, one of the main attractions was adorable baby wildlife. These guys were found out in the wild separated from their mothers and are being weaned at the center, to be released once they're independant. 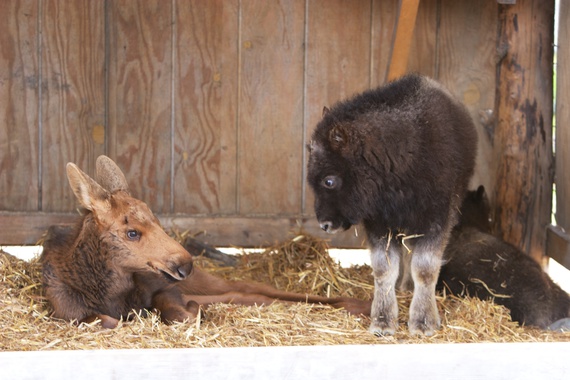 Others were born here on the center's land, and can be raised with their herd. 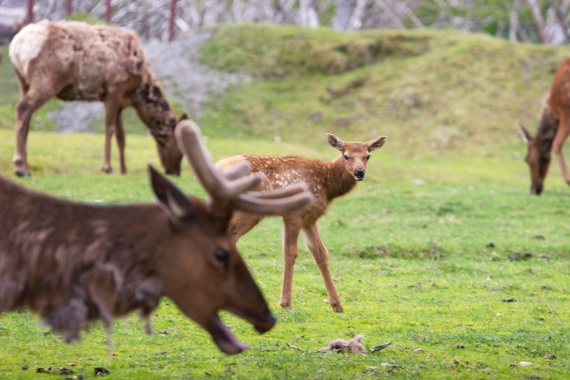 The center had all manner of large northerly herbivores. 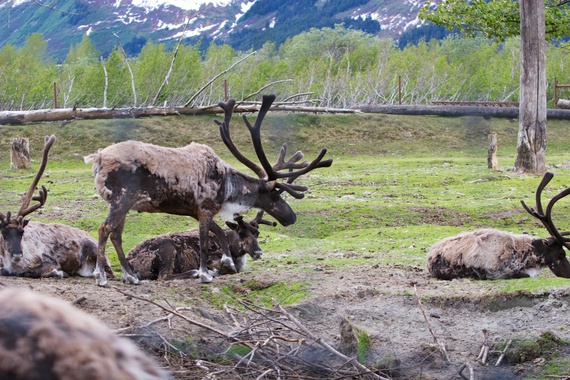 And it was possible to get pretty close to some of them. 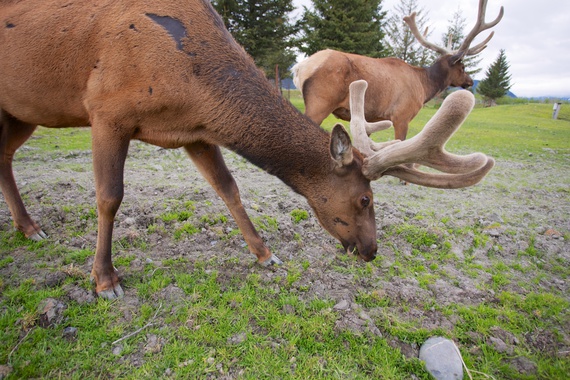 The rest of the trip was pretty uneventful. Having only four hours of (relative) darkness per day can wreak havoc on a circadian rhythm that's not used to such long days, so there was a lot of napping. 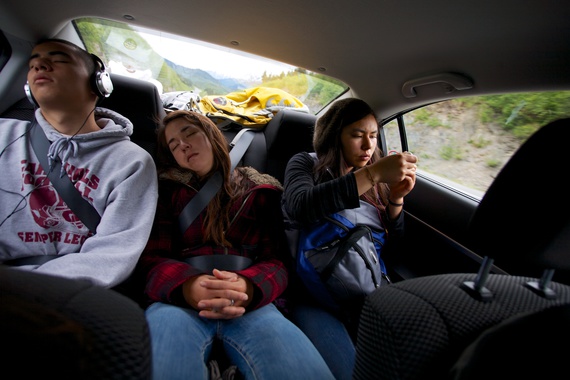 To be fair, parts of the drive were pretty boring despite the gorgeous views. 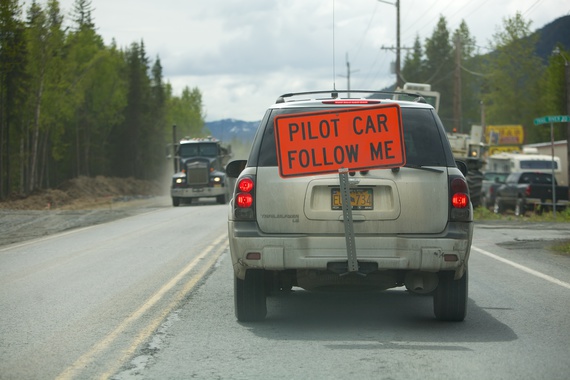 See you all on the ship!

We're doing this cruise with a lot of family, and they all arrived the day before departure, so we had a day in Anchorage. Stories were told. 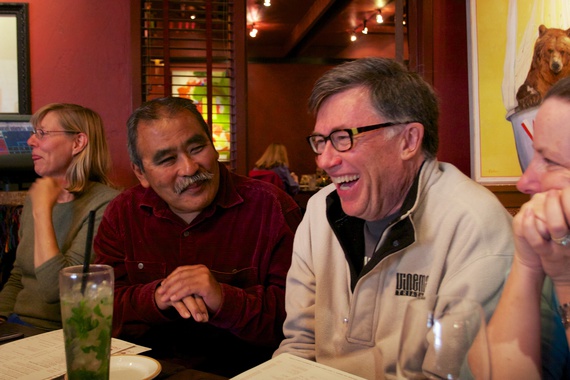 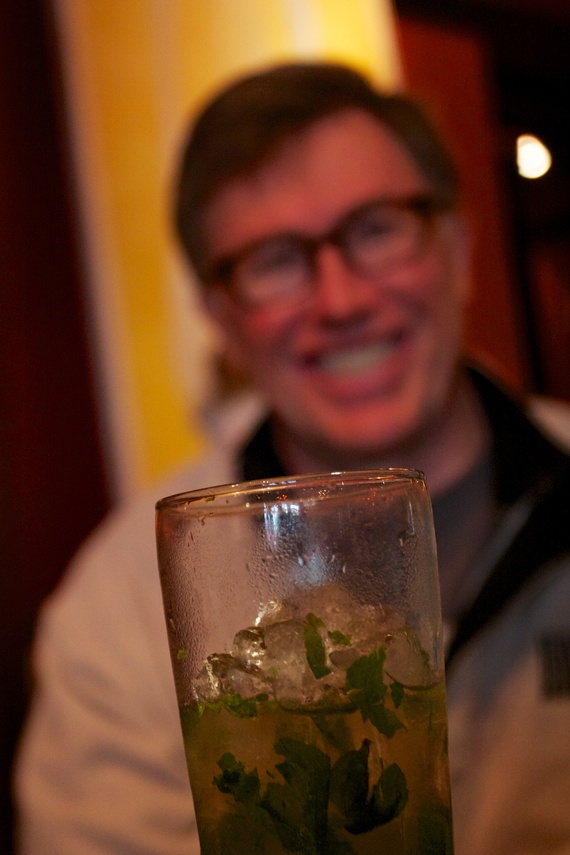 And good times were had by all. 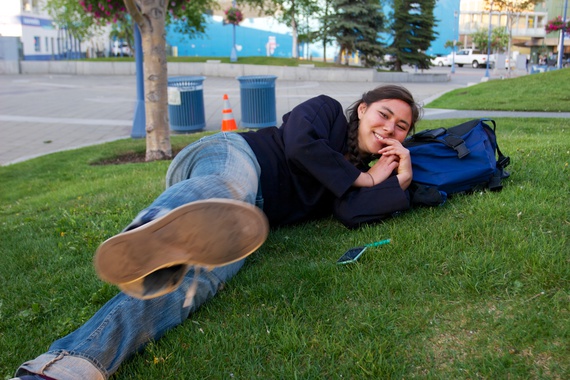 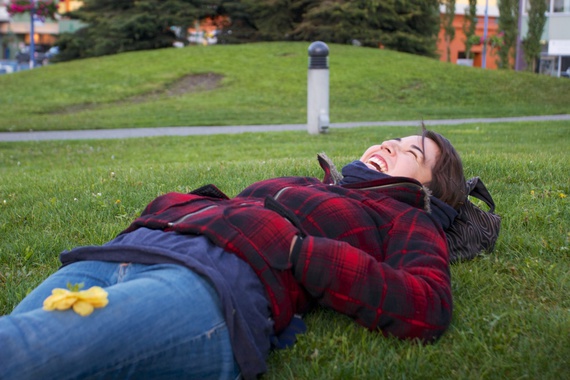 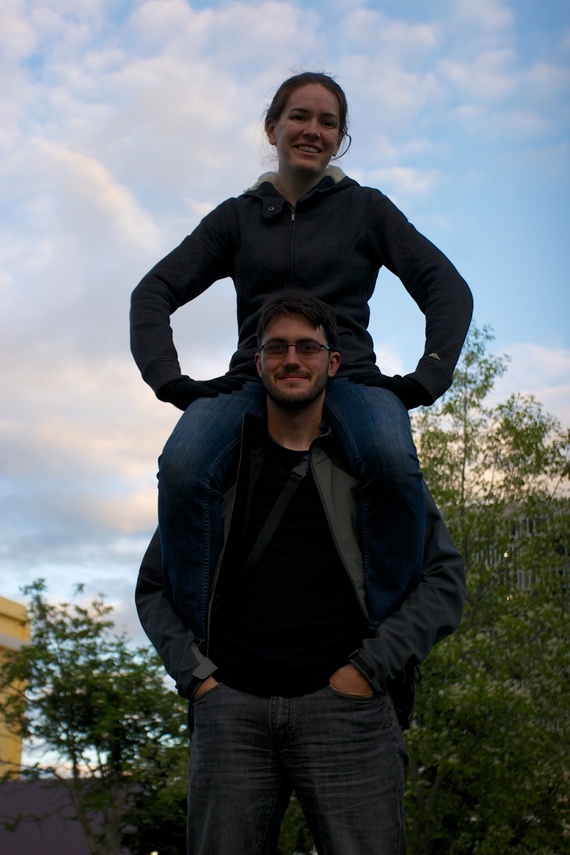 We landed in Alaska at around midnight and the sun was just setting somewhere behind the rainclouds. An easy shuttle ride to our hotel and we passed out after drawing the blinds to block the perpetual twilight that the locals call "night".

The next morning, Milami found a place to rent a motorcycle, and we were greeted at the door by their shop dog. 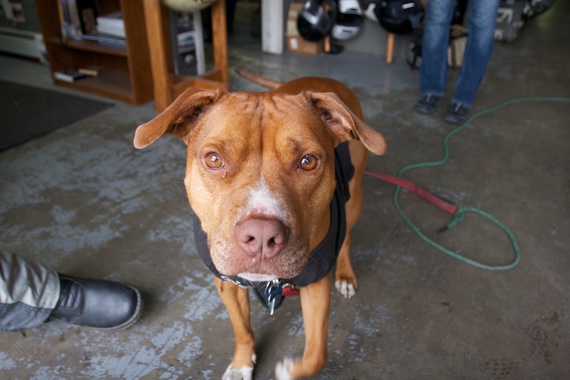 The day only got better from there. This was our trusty steed for the day: 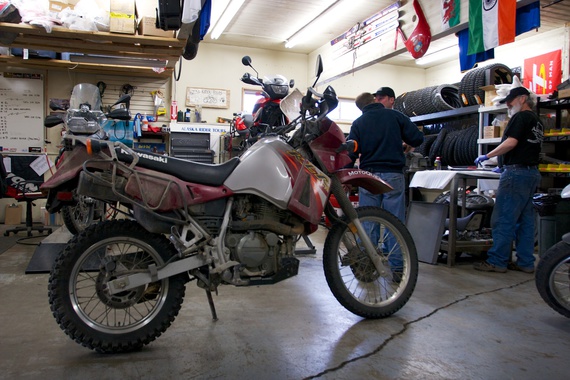 For anyone still watching, the nulami grand summer of travel has begun. If you see someone who looks like this from behind, make sure to say hello. 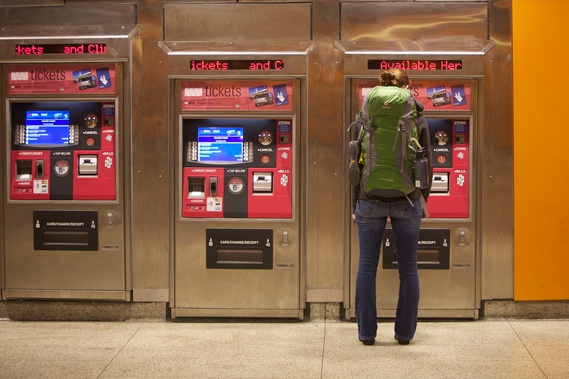 We flew through LGB, which is my new favourite airport. It's very Californian (all the hallways are outdoors), and the structures all seem to be temporarily erected. The bar only had Boston Lager and Stella on tap, JetBlue bought the entire terminal free snacks and drinks because two (of five) of the gates were serving delayed flights, and the jetway looked like this: 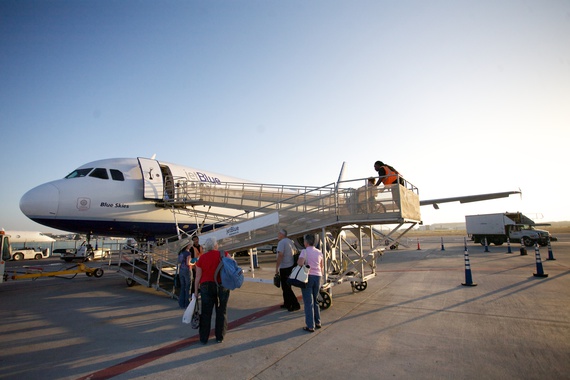 While out on a ride with BAMG, we ran across this guy at the four corners. 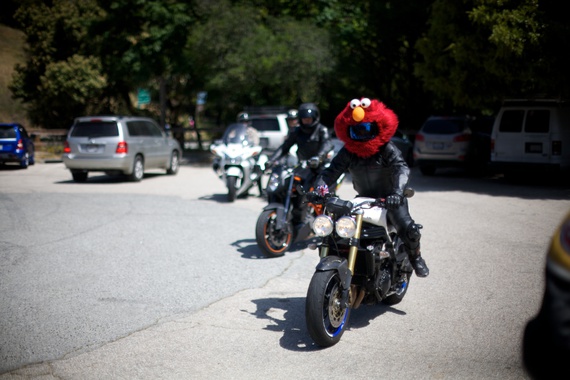 I love the zipper on this bike's seat. No clue why it's there. 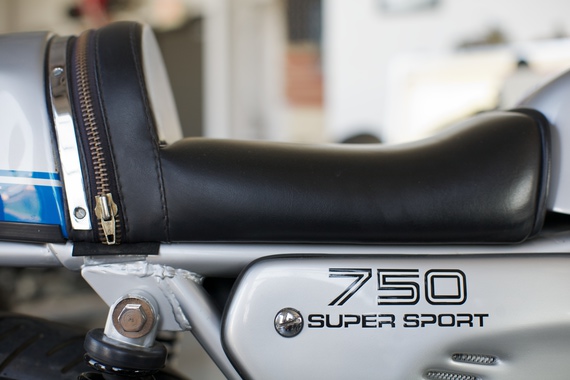 Another bike in the same room: 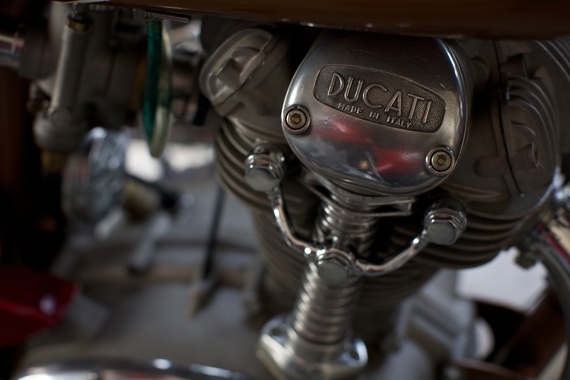