Funemployed in 2011, I take two motorcycles on a cross-country trip from California to Asheville to St. Louis. These posts document each day's travels. 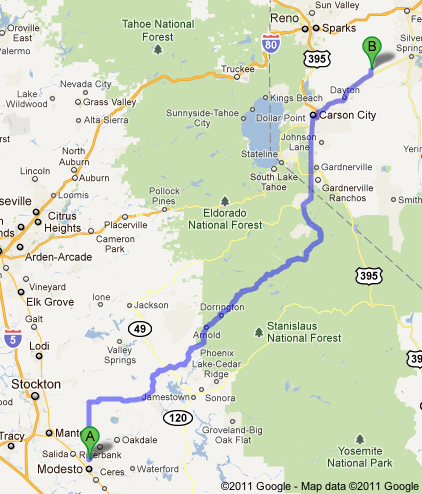 Took off from the in-laws at around 9:30 and got one or two obligatory goodbye pictures, this one with my sister-in-law. 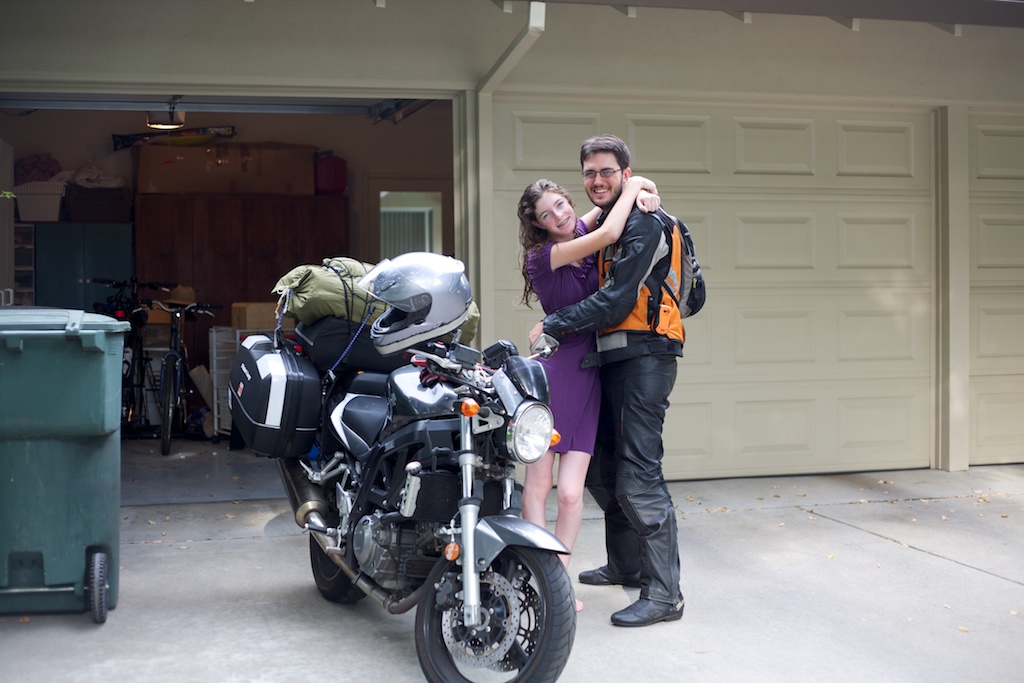 My chosen route was highway 4 across the mountains, a route which my father-in-law advised was very twisty and one lane in many places—perfect.

What he didn't tell me was that none of the pavement on the whole highway is older than a few years. It was gorgeous. 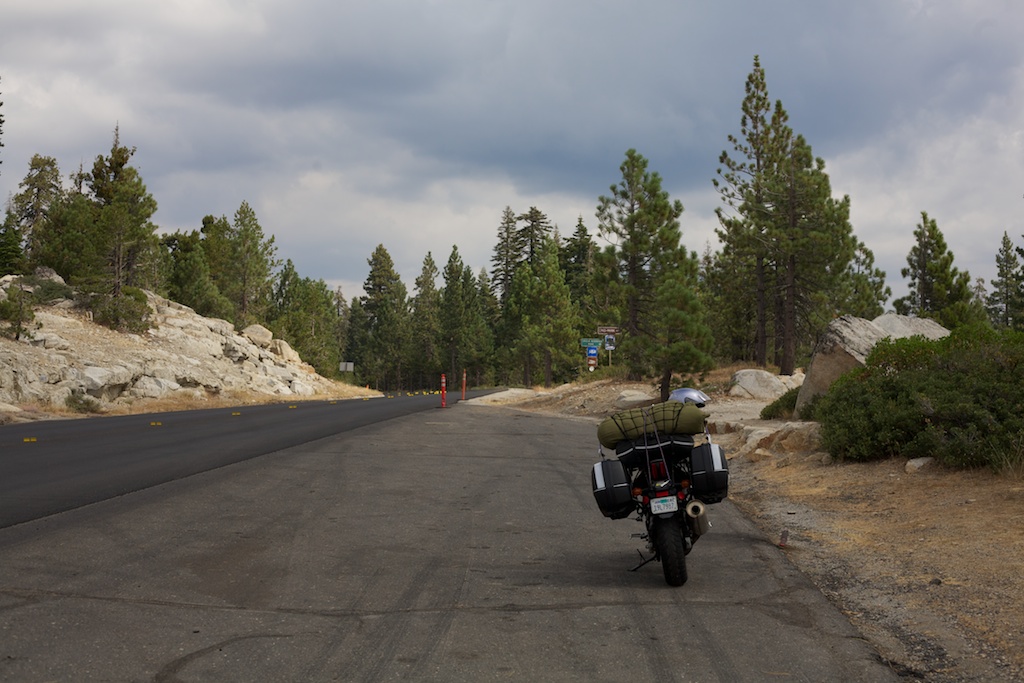 Yesterday's scenery was pretty stereotypical of California, with golden hills just waiting to catch on fire. Today's views could have fallen out of a Calvin & Hobbes anthology.

Near the start of the ride I caught up to a Harley who was obviously a local, getting as much lean out of his bike as he could. Unfortunately he made to pass an urban assault vehicle over a double yellow and almost ran into an oncoming highway patrol cruiser. That'll teach him.

Around Alpine Lake I pulled off and took a trail to the coast where some fisherfolk were trying their luck. 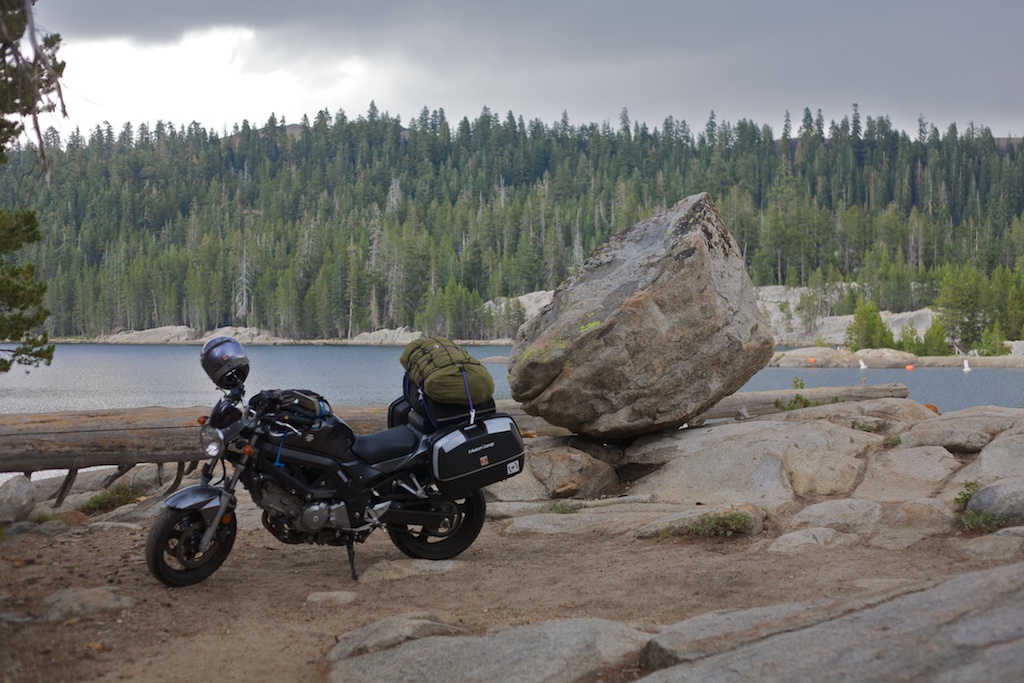 While there, I made another friend. 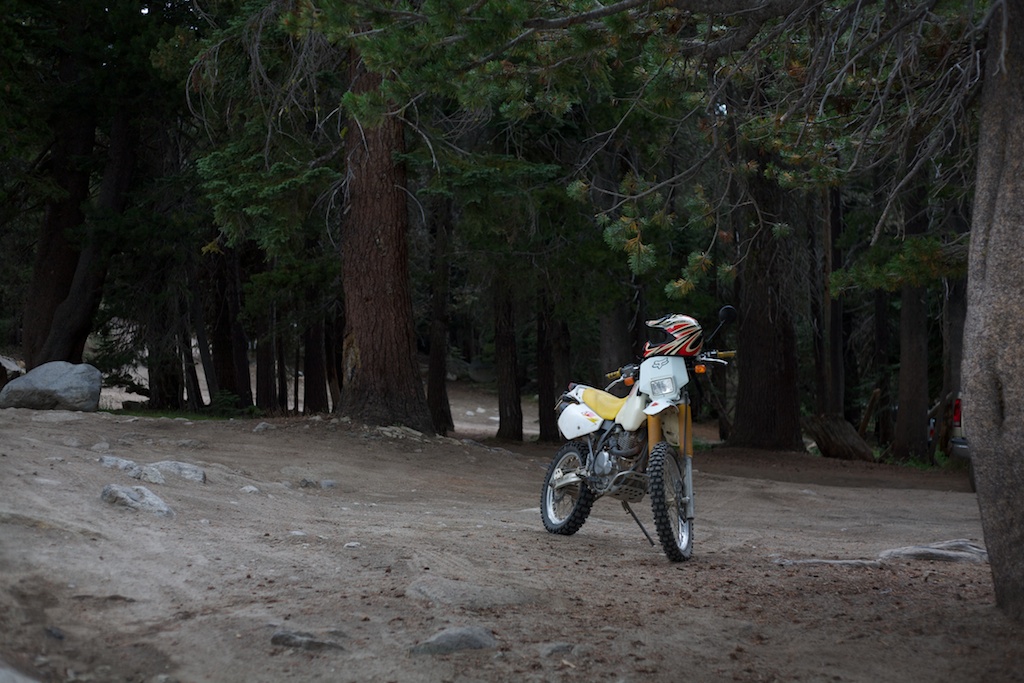 As promised, the road did go down to one lane, but all the traffic on it was mindful of the possibility of an oncoming vehicle. Always a good thing.

Out of the pass, 4 joins 89 and follows a river for a while. 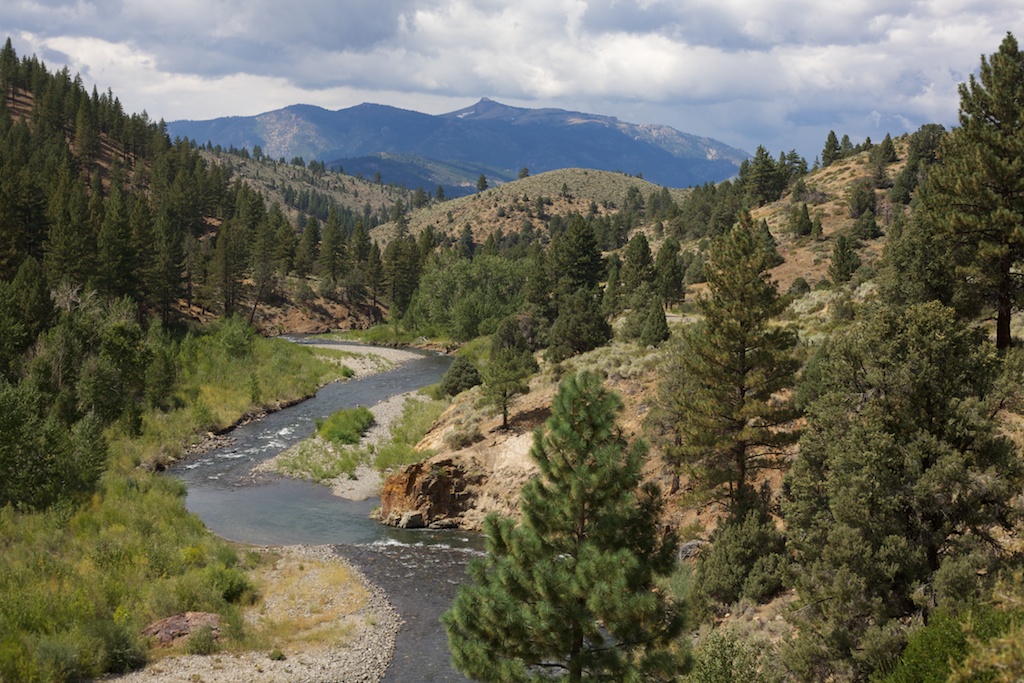 Shortly after, I passed the county seat of Alpine, and laughed out loud at this sign. 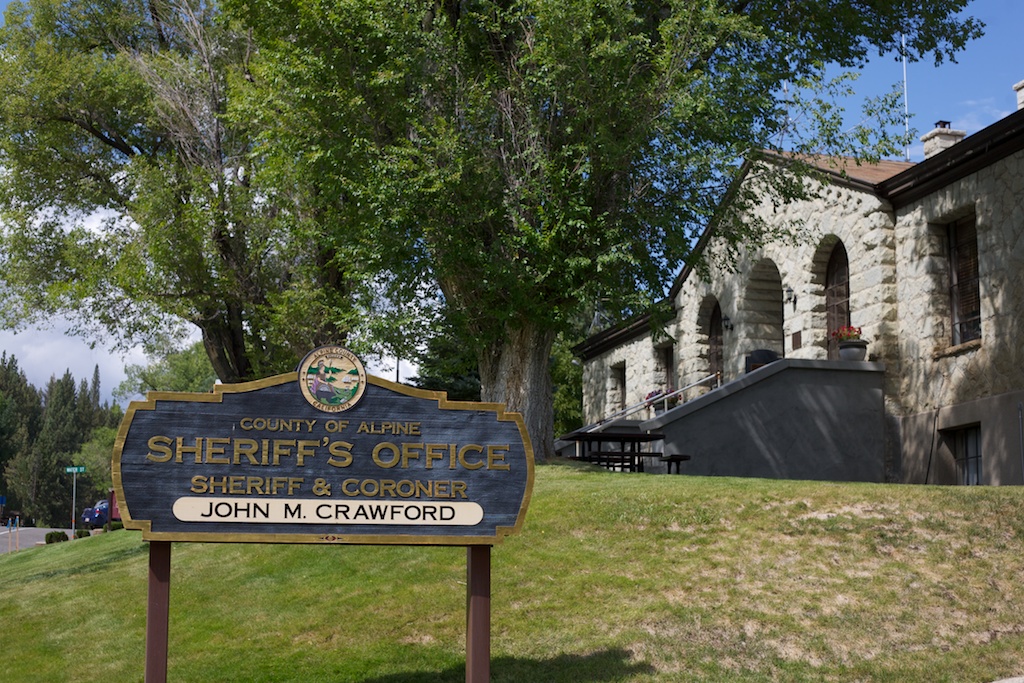 I can just imagine this guy's business card: "John M Crawford. I'll get you one way or another."

After that, the whole world opened up. I'm not used to being able to see things so far away—like rain falling on the right side of the road while the left was totally dry. 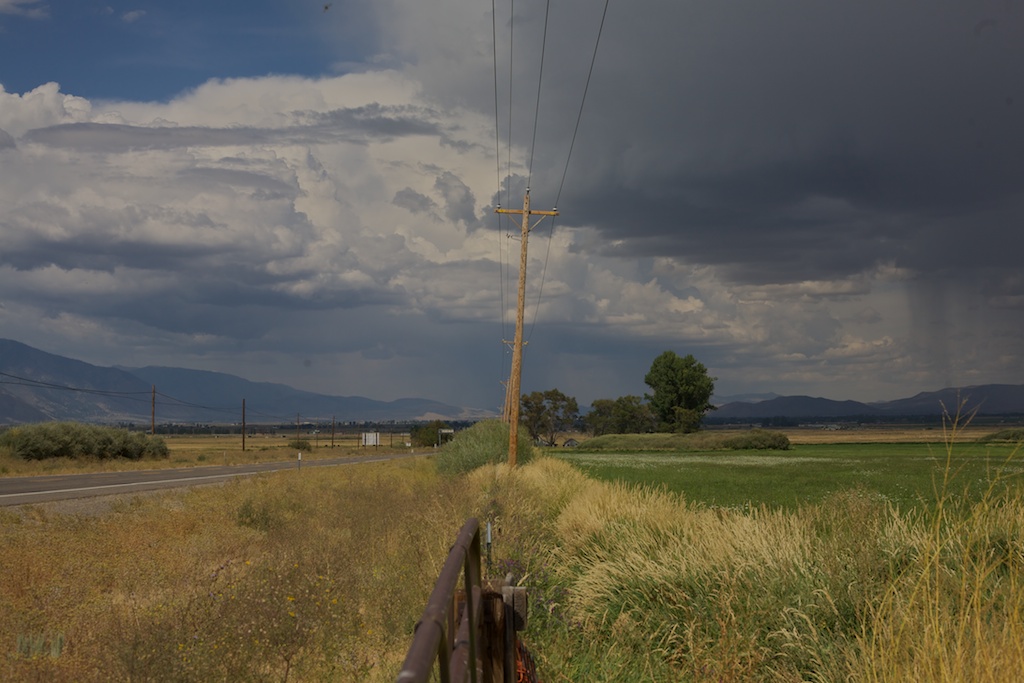 There was also the occasional lightning, which was a bit unnerving. Rain gear equipped, I got poured on a little bit, and then got to some clear skies where the desert dried me off.

My plan was to stay with a buddy outside Dayton, NV. Mark and I see each other about once a year when we both volunteer to carry referees and media people around a triathlon bike course on our motos. Mark's a great guy and I was stoked to see him.

However, I'd never been to his place. Turns out this is his driveway. Before you say it, the pictures not tilted—the world is. He lives on a hill. 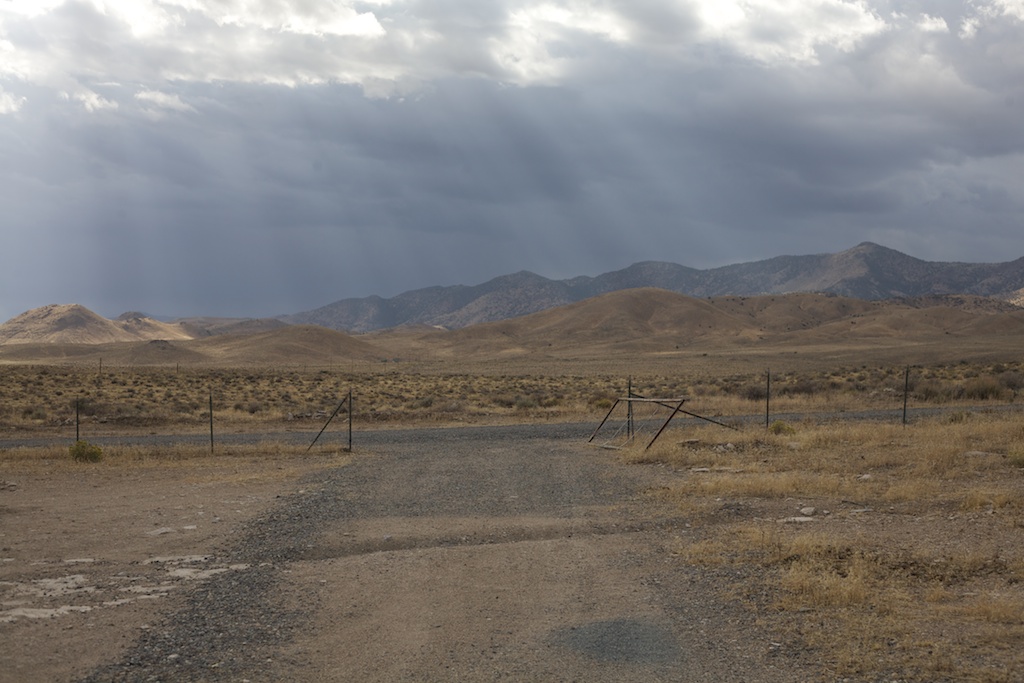 Our vehicles all parked together. 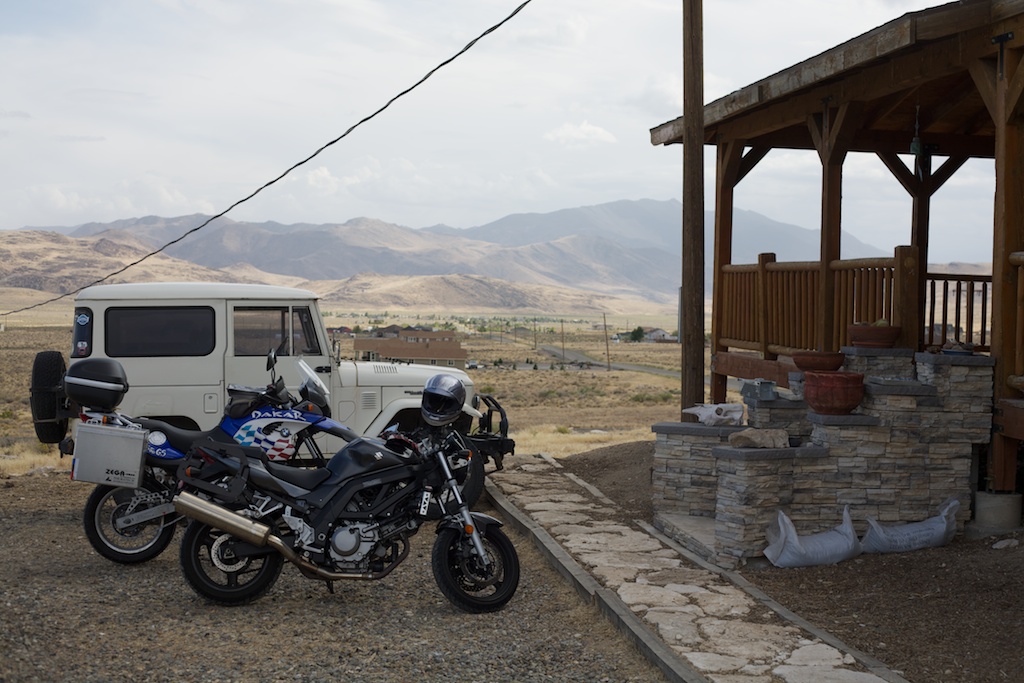 Unfortunately, Mark's not home. He's supposed to be on his way back from sfbay with some ladyfriends, but calling him didn't get a response, so I took a little tour of the property. Found this little guy roosting on the tire of a 2002. 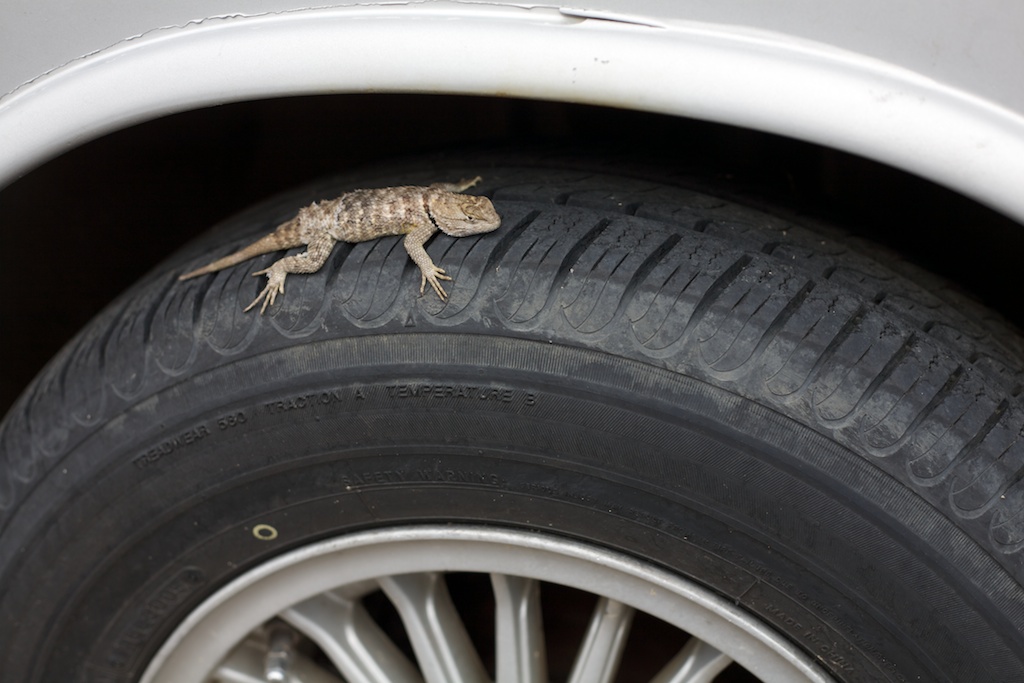 There's another building out back, which at first I thought (hoped?) was an outhouse. Turns out it's a wellhouse. 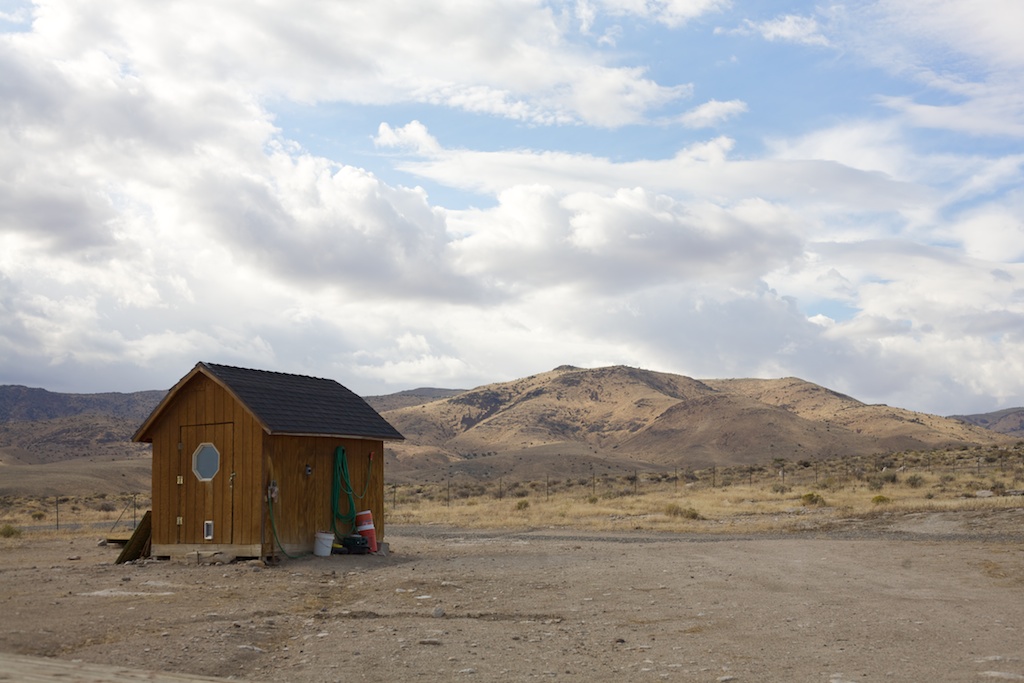 Around Mark's there's a whole network of non-road mostly-gravel trails ostensibly so residents can get around without road-legal/plated vehicles. I almost wiped out in some sand but got to a pizzeria in the neighbouring muni without a problem and had dinner.

I'm back at Mark's now, and he's not here yet. Good thing I brought a tent.